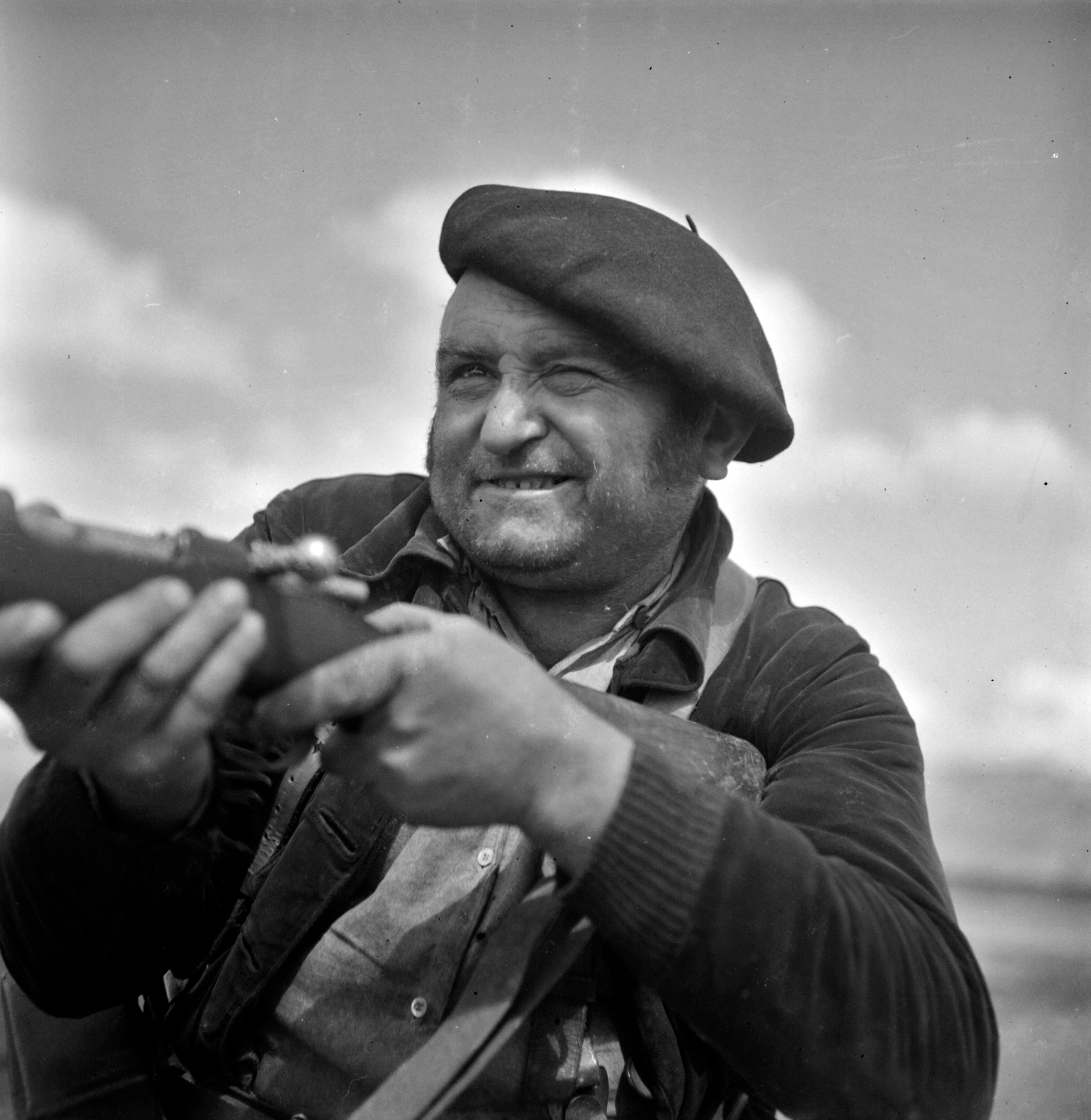 National Chalcography hosts this exhibition that includes a hundred original images and documents from the period.

PHotoESPAÑA wants to highlight the work of these photojournalists, fundamental figures for understanding history and contemporary photography.

The exhibition is a co-production between the Festival and the Huesca Provincial Council.

The boxes of Amsterdam: Kati Horna and Margaret Michaelis in the Civil War can be visited until July 24, within the Official Section of PHotoESPAÑA 2022

Margaret Michaelis (Dziedzice, 1902-Melbourne, 1985) and Kati Horna (Budapest, 1912-Mexico, 2000) put their cameras at the service of anarchism during the Spanish Civil War.

Contrary to what has been thought until now, his photographs of the war did not fall into Franco's hands nor did they disappear among the ruins of the bombings, but were safeguarded in the Amsterdam International Institute of Social History, along with the rest of the CNT-FAI material, at the end of the civil war. In the Dutch institute since 1947, they remained virtually invisible until 2016, when the anarchist photo archive was organized and its inventory published.

At the same time, and after hard archival work, the legacy of our protagonists was identified. On the one hand, the celluloid 35mm Leica camera of Margaret Michaelis, who, based in Barcelona since 1933, became the trusted photographer of the CNT-FAI during the first year of war. And 511 6×6 Rolleiflex camera negatives by Kati Horna, who, invited by the CNT-FAI, arrived in anti-fascist Barcelona in January 1937 to become the official photographer of the anarchists' foreign propaganda offices.

The boxes of Amsterdam. Kati Horna and Margaret Michaelis in Civil War, co-produced by PHotoESPAÑA and the Huesca Provincial Council, shows for the first time the images of these two Jewish photographers who did not hesitate to put their cameras at the service of the social revolution promoted by the anarchists of the CNT-FAI during the war.

The exhibition collects the unpublished legacy of these two photographers, recovered by the art historian and curator of this exhibition, Almudena Rubio, in a years-long investigation carried out at the International Institute of Social History in Amsterdam. A visual journey that the curator reinforces with unpublished documents from the time that help us understand the trajectory of these two reporters during the war.

The exhibition includes more than a hundred photographs (originals of the time and modern copies) from the CNT-FAI photographic archive deposited in the Dutch institute and projects for the first time the fragment of film, probably filmed on the Aragón front, found along with the rest of the material from the anarchists in the Dutch institute. Likewise, the exhibition exhibits one of the 48 wooden boxes known as the Amsterdam boxes in which the files of the CNT-FAI were stored, before the end of the war, to be sent to the Dutch city, in that effort of the anarchists to safeguard his legacy and his memory.

With this exhibition, the Festival wants to vindicate the value and work of women photographers, rescuing and publishing for the first time the legacy of Michaelis and Horna. Together, they offer us an unusual look at the war, documenting with their photographs the revolutionary experience of anarchists in their quest to fight fascism and build a new society.

Margaret Gross born into a Jewish family on April 6, 1902 in Dzieditz, a town of the old Austro-Hungarian Empire. He studies photography in Vienna and in 1928 he moves to Berlin. At the end of 1932 he opens his Photo Gross studio. At that time he meets the German anarcho-syndicalist Rudolf Michaelis (1907-1990). Active in the anti-fascist struggle in the city will be arrested. In 1933 they marry and she Margaret takes the surname Michaelis by which she is known today.

Fleeing from the Nazis at the end of 1933, they arrive in Republican Barcelona and are welcomed by the German anarcho-syndicalist couple, Helmut (1903-1966) and Dora Rüdiger (*1899-1922), friends and colleagues of the DAS Group (Deutsche Anarcho Syndikalisten ), very active during the war. Michaelis opened his photographic studio on Rosselló street and, after separating from Rudolf in 1934, he established himself at 218 República Argentina avenue under the name Foto-Elis.

He begins to work with the Group of Spanish Technicians for the progress of Contemporary Architecture (GATCPAC), highlighting his report on Barcelona's Chinatown.

When the civil war broke out, she portrayed the revolutionary atmosphere of Barcelona with her Leica camera and quickly became the trusted photographer of the anarchists. She photographed the collectivized rearguard and her work for the CNT-FAI was marked by the arrival of the anarchist Emma Goldman (1869-1940) on her first trip to anti-fascist Barcelona in September 1936. Together, they would travel first to Aragón and later to to Valencia, documenting those trips in hundreds of 35mm negatives identified in Amsterdam and presented for the first time in this exhibition.

His photographs were published in newspapers such as Workers Solidarity, L'Espagne Antisfaciste; in the Umbral and Mujeres Libres magazines and in the first propaganda album released by the offices, the album July 19, 1936 Spain. Also, she collaborated with the Commissariat of Propaganda of the Generalitat de Catalunya and some of his reports were published in the album Madrid and the magazine New Iberia, launched by the Catalan organization.

At the beginning of 1937, after getting a divorce from Rudolf, and coinciding with the arrival of Kati Horna at the CNT house, Michaelis left Barcelona and traveled to Vienna, Poland, London and finally emigrated to Australia in 1939, establishing herself as a photographer for the third time in an unknown country.

After his death in 1985, his work, including some civil war photographs, became part of the collection of the National Gallery of Australia. However, his greatest legacy from the Spanish war has been identified in the CNT-FAI archive in Amsterdam.

Katalin Deutsch Blau born on May 19 in a Jewish family in Budapest. She is active in the left-wing movement in the city, she will meet fellow Hungarian photographer Robert Capa (1913-1954) and whom she will become her first husband, the Hungarian Paul Partos (1911-1964). In 1929 she Katalin and Partos moved to Berlin and became part of the "study group for the critique of Marxism", organized by the anti-Stalinist Karl Korsch (1886-1961). After Hitler came to power, the couple returned to Budapest, married, and Horna decided to study photography at the school of the renowned photographer József Pécsi (1889-1956). However, they quickly move to Paris.

In bohemian Paris they survive thanks to the works of Horna (the “flea market” series and the “cafés de Paris” stand out). There they are surprised by the Spanish civil war. In the fall of 36, Partos collaborates with L'Espagne Antifasciste dependent on the CNT. It will be then that they meet the German Jewish cartoonist Wolf (Wolfgang Burger, 1917-1940), with whom Horna carries out his well-known satirical series against Hitler starring eggs and objects.

In January 37, Horna and Partos (under the pseudonym Paul Polgare), followed by Wolf, decide to move to Barcelona. With the name of Catalina Polgare, she began to work as an official photographer for the CNT-FAI with a salary of 84 pesetas per week, which she maintained until she moved to Valencia in July of that same year. She spends seven months in which she takes photographs in Barcelona and travels twice to the Aragón front, configuring the archive identified in Amsterdam. At the same time, with the help of Partos, she creates the Spanish Photo Agency, known as Photo SPA, of which she will be the main photographer. Together with her colleague Wolf, also employed in the offices, Horna produces the second propaganda album SPAIN? launched by the CNT-FAI.

In July he moved to Valencia to work for the anarchist magazine Threshold. Tireless, the art worker (as she proclaimed herself) traveled to Xàtiva, Silla, Vélez Rubio, Gandía, Alcázar de San Juan, Madrid, Alcalá de Henares and Teruel to return to Barcelona in January 1938 and continue her work in the magazine, recently moved to the city. In the writing of Threshold She meets the man who would become her second husband, the Andalusian anarchist and artist, José Horna (1912-1964), with whom she will carry out some of her well-known photomontages.

After leaving Barcelona in mid-1938, while in Paris, Kati and José Horna decide to go into exile in Mexico. Installed in the house in Colonia Roma, they would have her only daughter, Norah Horna, and under the name of Catalina Fernández she would dedicate her whole life to photography.