THE PHOTOGRAPHER SUSAN MEISELAS RECEIVES THE PHOTOESPAÑA 2022 AWARD, A RECOGNITION OF HER CAREER AND HER APPROACH TO PHOTOGRAPHY AS A TOOL FOR DENOUNCING SOCIAL AND POLITICAL CAUSES 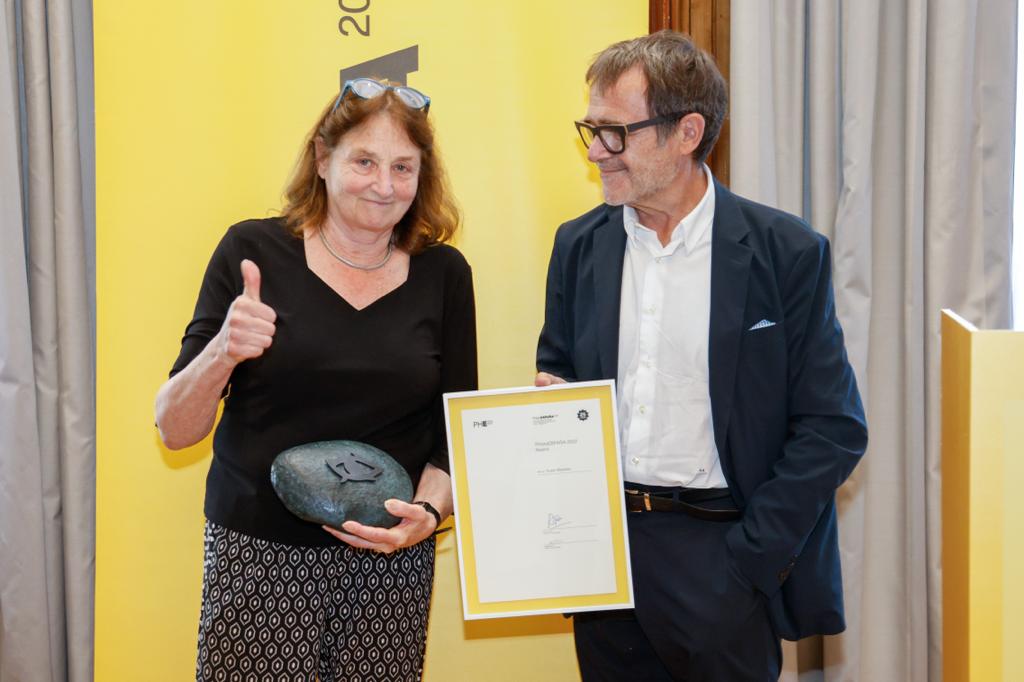 In this edition, PHotoESPAÑA has also wanted to remember the figure of Bárbara Allende, Ouka Leele, with the PHotoESPAÑA Honor Award.

The Moisés Pérez de Albéniz gallery, with the exhibition Do not cross. Unpublished photos 70's – 80's, by Antoni Miralda, has been awarded the OFF prize.

The photographer Jorge López, for his project The Clot, is the winner of the PHotoESPAÑA 2022 Discoveries Award.

PHotoESPAÑA 2022 has recognized the work and career of the American photographer Susan meiselas with the PHotoESPAÑA 2022 Award. A member of the Magnum agency since 1976, his documentary project for the agency covering the insurrection in Nicaragua was a turning point in his career, while at the same time transferring the international community's view of the situation in the Central American country .

From that moment on, Meiselas's career was closely linked to political and social conflicts with coverage of humanitarian crises in Chile, El Salvador and the border between the United States and Mexico. Likewise, he has done various jobs in his native country.

In an edition of PHotoESPAÑA in which one of the keys to documentary-style photography, the work of Susan Meiselas can be enjoyed within the project Sculpting Reality of the invited curators of PHotoESPAÑA 2022, Vicente Todolí and Sandra Guimarães.

Within the proposals of this curated programme, morning, Wednesday June 8, A las 12.30 hours Susan Meiselas will offer a talk at the Espacio Fundación Telefónica.

In memory of Ouka Leele

The Festival has also wanted to remember the figure of Barbara Allende, Ouka Leele, one of the most outstanding and original figures of contemporary Spanish photography and representative of the mythical Madrid Movida.

This morning, the garden of the Lázaro Galdiano Museum hosted an act in which the PHotoESPAÑA Honor Award was presented to his relatives and in which the film director Rafael Gordón and the actress Ángela Molina took part.

In addition, and thanks to the collaboration of the Madrid City Council, the screens of Callao will have throughout the day today a memory of Ouka Leele's career, through some of his most iconic images.

The jury was made up of José María Rosa, a member, along with María Bleda of the photographic collective Bleda y Rosa, winner of the 2008 National Photography Prize, Alicia Pinteño, Head of Editorial Activities at the Reina Sofía National Art Center Museum, and César Martínez-Useros, Director of The Factory publishing house.

Shifters, edited by Visual Arts Foundation & Landskrona Foto, is the result of the many years that visual artist Marta Bogdańska dedicated to researching and editing archival material, mainly related to the use of animals by the military, intelligence agencies and police forces. Westerners since the end of the XNUMXth century. The jury awards this book for its work in recovering archives and highlights "the intelligent touch of irony that permeates the entire investigation and gives the message a different and vindictive vision."

The award in its national category goes to Martin Chambi. Photographs. Martín Chambí dedicated a large part of his life to photographing the Peruvian Andes, vindicating the pre-Hispanic past through images of Inca ruins and the portrait of the life of Andean communities at the beginning of the XNUMXth century. In this way, Chambi incorporates a new perspective into the local photography of the time, proposing a unifying view of Peru and also giving light to indigenist discourses that were beginning to gain strength in this territory. Martin Chambi. Photographs, edited by RM “collects the most emblematic images of the author through an impeccable edition.”

at the same fight, by Rosa Gauditano brings together black and white photographs of the social movements of São Paulo in the 70s and 80s during the dictatorship in Brazil. This edition focuses on the struggles of women and their important role in changing Brazilian society that culminated in the end of the dictatorship and led to the elections for the presidency of the republic. The jury awards this self-publishing for being a "visual essay that narrates a story that talks about social movements in Brazil, but that could be portraying any movement thanks to the universality of the message." The jury has especially highlighted how the edition is resolved with images that are intermingled on double pages of the book, an intelligent nod to the communication strategies of social movements.

RM, one of the most prestigious art book publishers in Spain and Latin America, focused mainly on photography and contemporary art, has been awarded as outstanding publisher of the year. It is celebrated, not only the high quality of all the projects that have presented the Prize, but also the important effort they have made in recent years to continue producing high quality photobooks.

The galery Moises Perez de Albeniz With exposure Do not cross. Unpublished photos 70's – 80's, by Antoni Miralda has been the winner of the PHotoESPAÑA 2022 OFF Award. The jury was made up of: José María Díaz-Maroto, Diana López and Eduardo Rivero.

The jury has also awarded two honorable mentions, one to Freijo Gallery with the exhibition Famous and Anonymous. Pictures and another to the Pokoespacio Gallery for the exhibition spaces, by Diego Domínguez, Fede Serra, Luis Malibrán, Ignacio Pereira and Jesús Chamizo.

Likewise, he wanted to highlight the project place, threshold, by Lucia Gorostegui at Pavilion Espacio de Plantea Estudio. Due to “the coherence of the installation and its inquiry into the material and the photographic object beyond the image.”

The project The Clot, Jorge Lopez, has been awarded the PHotoESPAÑA 2022 Discoveries Award.

El Clot, in Valencia, is a neighborhood that has practically disappeared, of which only the port block remains standing. Its inhabitants are mostly gypsy families who have occupied the floors of the building that were abandoned.

El Clot is a documentary and portrait artistic photography project. This work constitutes a reflection, a way of exploring the world and understanding it. As the photographer points out: “I am interested in the individual, his face and his architectural environment. I have always worked with the human being, with real people and their real situations, with people as a photographic object. I am looking for an unwavering but intimate portrait, direct but sensitive, objectively powerful but full of personal emotion, the product of a commitment to people and their environment, trying to represent both their strength and their vulnerability.”